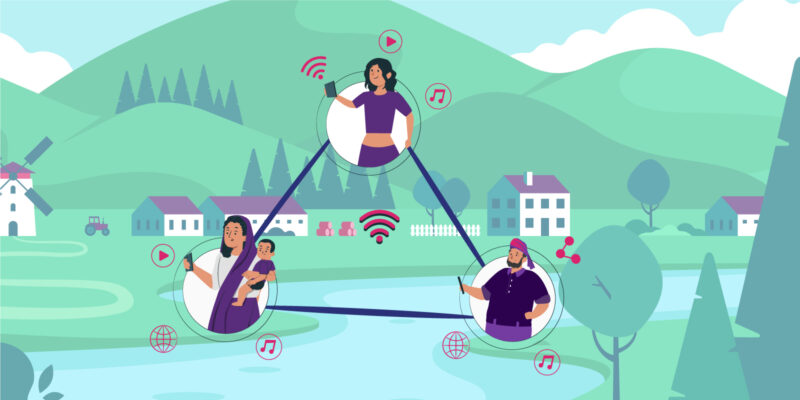 Imagine a day in your life without internet. No access to emails, social media, google, online videos, shopping sites. Hard to imagine, right? Our whole day is surrounded by activities linked with the internet. It is estimated that on an average, in India, an individual spends approx. 5 hours on smartphones, which is one of the highest in the world. A day without internet may seem like an alternate world and that is the reality for an estimated 40% of the people in India. In fact, 42% of India’s population doesn’t have internet connection. They have largely been living in a digitally dark zone. Digital services which are now sub-consciously embedded in our minds are yet to find their way into rural India.

Millions of students in rural India travel miles to attend a school because they want to learn and accomplish their dreams of becoming engineers, doctors, artists, scientists, and teachers. “When I grow up, I want to become a doctor to serve my country,” said 10-year-old Daksha when talking about her dreams for the future. When she is not in school, Daksha helps her family in the rice fields and with day-to-day chores such as cooking and feeding the cows. She lives in a one-room hut along with her three siblings and she is the only one in the family who has had the opportunity to go to school.

As per Annual Status of Education Report (ASER) survey in rural areas, only 18% of the Government schools have a computer and 4% have an internet connection. 55.5% of students in India have never used computers and only 11% have attended online classes. With digital literacy becoming a necessity for survival, lack of internet access has a paralysing effect on their studies and growth prospects.

And the problem doesn’t end here; it grows further to young population not being able to work due to lack of proper training, job opportunities, financial and digital resources. As per economic survey, 2016-17, 90 lakh people on average travelled inter-state each year for work. These are probably the fortunate ones who find opportunities in other states and are able to earn a living for their families. But others, especially the village women, are often left jobless. Despite many-fold growth in India’s gross domestic product (GDP) since the early 1990s, rural economy has remained under-developed, with marginalised groups suffering the most as income-generating opportunities are hard to come by.

Despite multiple efforts by the Government, NGOs and Corporations, the quality of education and employment in rural areas remains a challenge. Most of the efforts and investments so far have been in offline initiatives such as setting up schools/training centres, upgrading infrastructure, financial aids, distribution of study materials etc. which impact a very small fraction of the population. There are still many areas untouched by these initiatives. A panacea to these problems could be technology which can connect and impact millions of people. Many of the NGOs and Government organisations are bringing technology into the villages which would provide interactive learning solutions to the children, practical training to the youth and women, and job opportunities to everyone. These initiatives would gain more momentum if more organisations came forward to direct their CSR funds towards digital innovation in rural areas.

India, as a country, has shown remarkable resilience in overcoming adversities. From a poverty ridden ‘hand to mouth’ country at the time of independence, India has established itself as an upcoming super-power. As India approaches Diamond Jubilee of independence, lets target to deliver superior outcomes towards inclusive growth. We just need to join our hands together.

Nuts and Bolts of an Effective Design System

A framework centered around Quality